Ian Potts belongs to a tradition in landscape painting that includes John Sell Cotman and Thomas Girtin, but that tradition confirmed the perspective of the viewer. Ian’s work challenges the viewer’s perspective by communicating the individuality of his subjects. The painting below exhibits an individual quality that might be overlooked. It has a quality that touches viewers and invites them to pause. 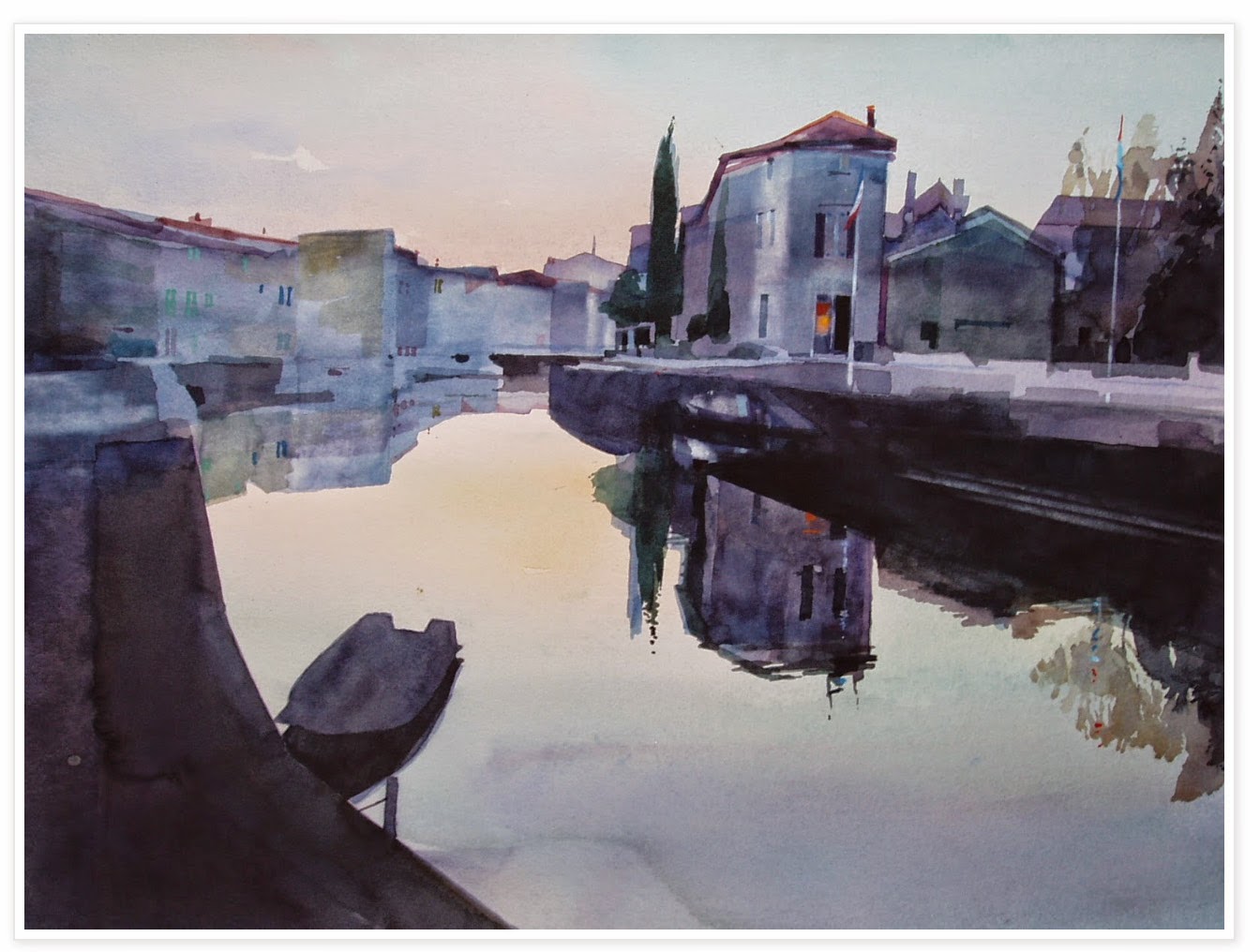 La Porte Verte
To some extent the pause in the viewer’s response is effected by the separation of the subject from the artist and the viewer. The effect of the large sheet of water in the foreground is to separate the subject from the artist and the viewer. This is not the separation exhibited by a structure calculated to impress, such as a stately façade placed on the far side of a lake, but an invitation to feel what it is like to belong there.

Ian had a strong sense of the 'otherness' individual places. This is formed between the artist and the place, and between the artist and the painting. The painting is the product of a process by which the artist recreates quality and energy of the subject, which has absorbed it's own history and the effects of nature.  Places have qualities that have been created over time and this process continues through the painter's energy.

This energy might be overlooked, but Ian’s particular receptiveness and talent causes the viewer to pause and notice.  It becomes possible to see places in new ways, by offering contrasts between the individuality of the place and the painting it inspired.

Ian reacts to individual places differently and represents them accordingly.  He doesn't adopt an overall style, but he is fluent in the medium of watercolour.  He doesn't sever the qualities that would link a painting with the place that inspired it.

Ian’s love of the otherness of individual places distinguishes his work from, for example, Girtin’s ‘Stepping stones on the Wharfe’. 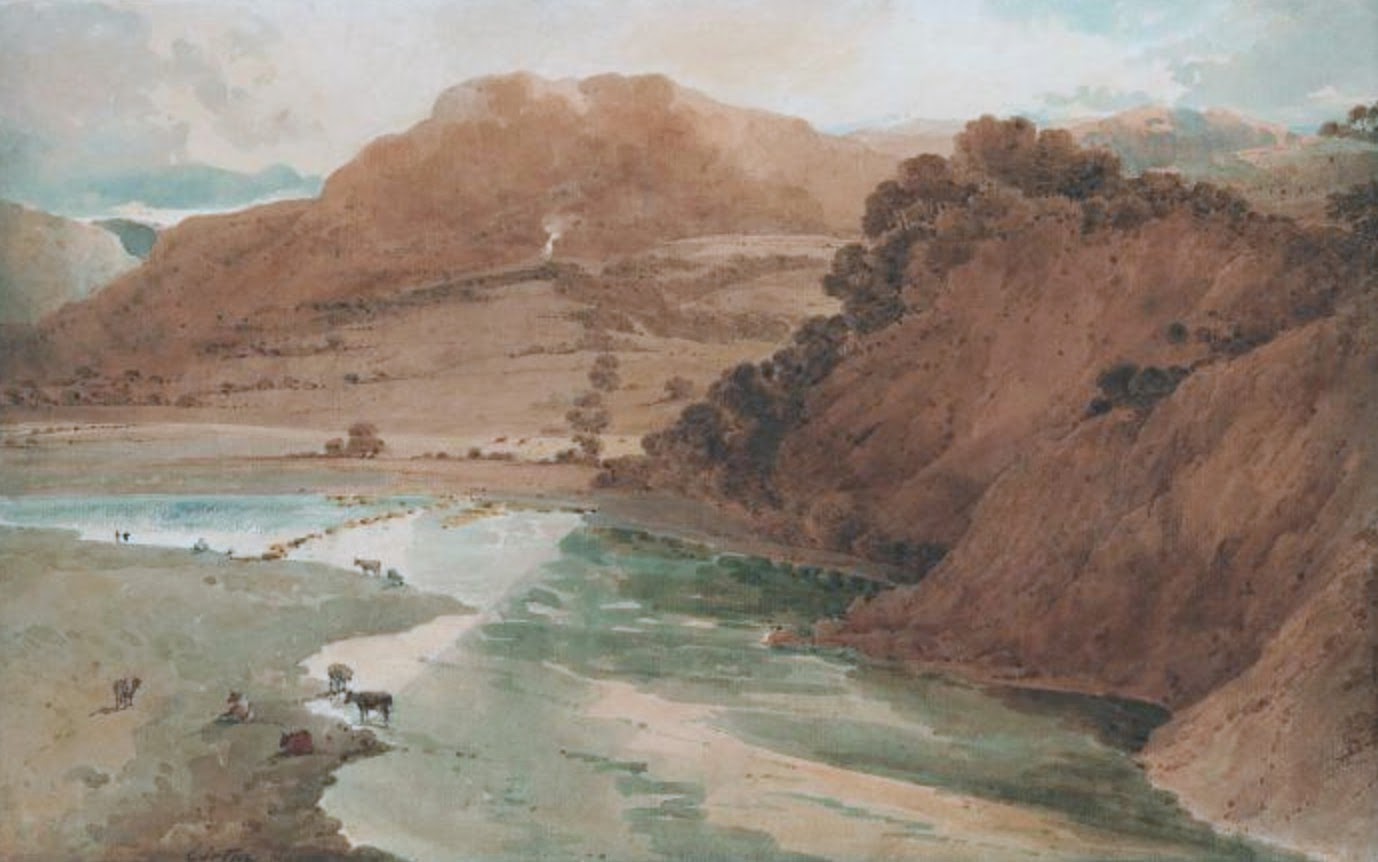 Firstly there is the scale; Girtin’s image measures almost 21” wide, while many of Ian’s images are 3’ wide. Then, the dynamic range of Girtin’s palette is much less and the colours are less saturated. But crucially in this case the broad river in the foreground of Girtin’s picture extends back into the picture along with the fells that form the riverbank on the right so that the scene confirms the perspective sought by the viewer. Furthermore in Girtin’s painting the only signs of human industry are the stepping-stones and the cattle, whereas in many of Ian’s landscapes man-made objects, such as buildings and boats, are prominent.

Ian’s painting of Torver beck in the Lake District does not provide the reassurance many earlier landscapes provided for viewers, but confronts them with nature’s autonomous energy. The individual look recreated in this picture emphasises an enduring process rather than a settled order. The tendency to reflect upon an image of the world and see that it is good has been given up in favour of noticing that the dynamics of nature are the claim of a spectacle to be a powerful stakeholder. The artist and the viewer have something to learn from nature, something that cannot be represented by the laws of matter in motion. 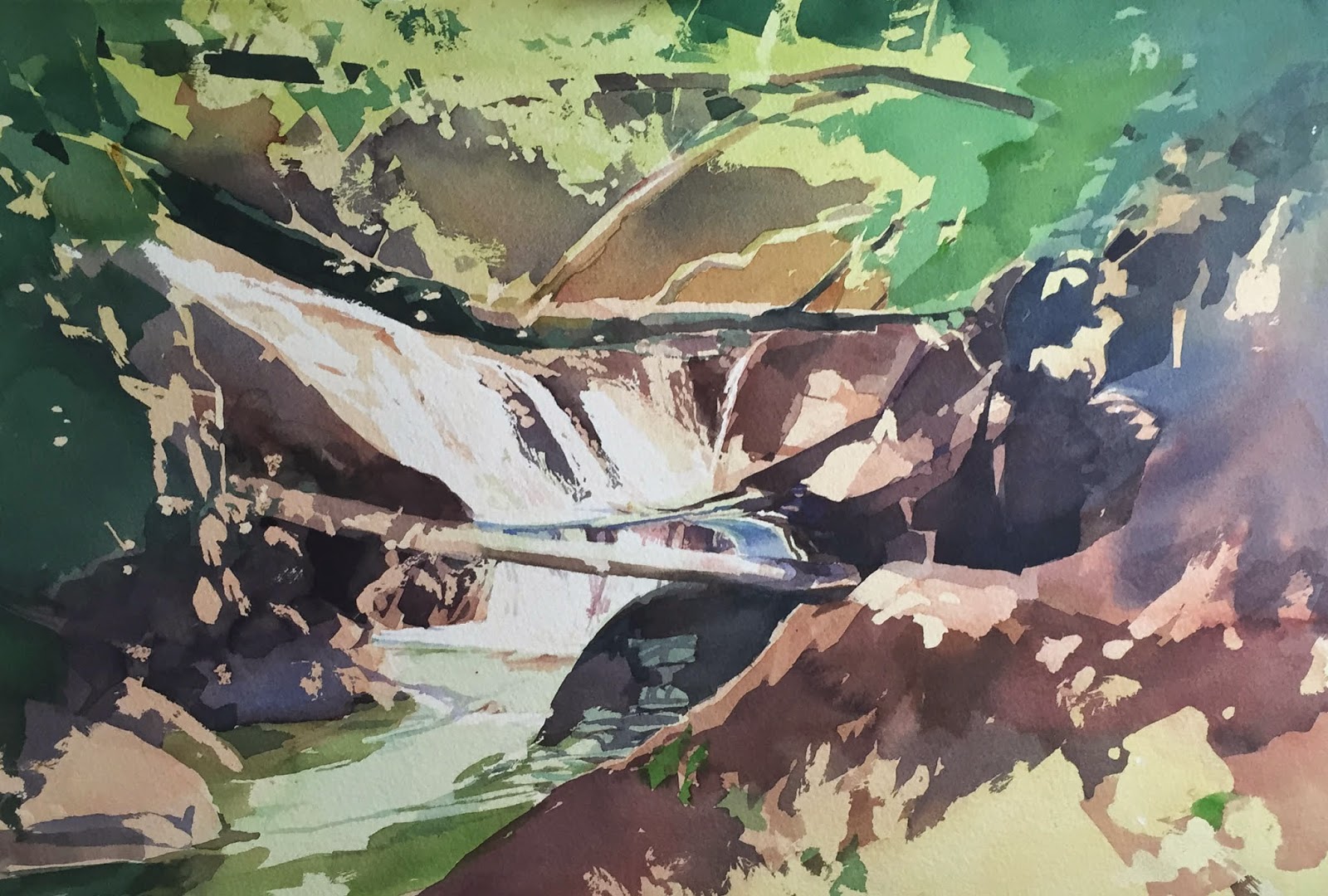 Waterfall, Torver Beck
But however many distinctions we may detect, and at a time when abstraction and collage are popular, Ian’s work is remarkable for sustaining the representative tradition in English watercolour painting. While moving on from the Classical, the Picturesque, the Vernacular and the neo-Romantic styles that mark the history of English landscape painting Ian advanced the English watercolour tradition just as Cotman and Girtin did before him.


In many of Ian’s pictures human artefacts stand out as unaccomodated figures against a natural ground. This sense of separation of the objects produced by human engineering within the painting is found in several paintings of fishing boats at Hastings:

The boats are abstracted from the place in which they have been placed; i.e., dragged, they sit like beached pensioners reflecting on their collective history at sea.
Ian’s work is part of the twentieth century acknowledgment that human beings need to belong to places. The nineteenth century desire to make sense of things by acquiring the script that controls them has now given rise to an anxiety that the public script is hostile to place-making. We have learned that scientific empiricism has resulted in a competitive negotiation of the individual’s public identity and their alienation from what appears to be an indifferent natural environment.
How can anyone find meaning in an order in which everyone knows that the good sense championed in today’s media will be discarded in tomorrow in favour of something different – just as clocks have always already discarded the present time?
Sense-making codes are not confined to the discipline of scientific inquiry; they also serve the surreal and the fanciful possibilities of the human imagination. These fanciful possibilities have made it possible for the media to fuel a desperate escapism. Some modern painters has been to construct ever more fanciful possibilities, but Ian felt the need to disclose the relational order of individual places and show how they can resist the sense-making readings of the human imagination.
In detouring around abstraction and surrealism Ian found an alternative to the fantastic style that is a feature of some recent landscape painting. His work demonstrates the possibility that artists need not rely upon emotions aroused by injections of extra-ordinary content, they can choose to realise the quality of feeling in a neighbouring place, which is often overlooked by an absent-minded slumber.
A landscape is a place that exhibits the growth of a relational order, and the artist who paints a landscape is making a gesture that adds to the place by responding to, and influencing, that energy. Such responses are examples of the inter-subjectivity that fuels the growth of places. This inter-subjectivity between individuals is a mutable order whose development is contingent on actions grounded the passibility of every participant. Ian had the technique to communicate the inspirational energy of places to the public.
The relational order of places created by enduring individuals is an alternative to the separation of subject and object in both science and a media driven consumerism. Those who participate in place-making enhance the ecology of their place whereas sense-making is the act of an impassible, immutable and exploitive subject who determine themselves and others as objects. Ian has exhibited another empiricism that acknowledges the place-making emotions that have been marginalised by science and the sensationalist media. It is a tradition that acknowledges not only the present, but also the contingent possibilities inherent in it.
Ian’s love of neighbouring places enabled him to communicate their unique look without dismissing their ordinary appearance; this technique offers the viewer an extraordinary way of re-reading what may have become too familiar landscapes.

ianpottsartist
I feel part of the evolving history of watercolour painting which set down its English roots in the early 1700’s. My main preoccupation is based within landscape subjects. In structuring visual images in today’s context, this medium holds the relevant qualities with which to interpret and explore this world around me.